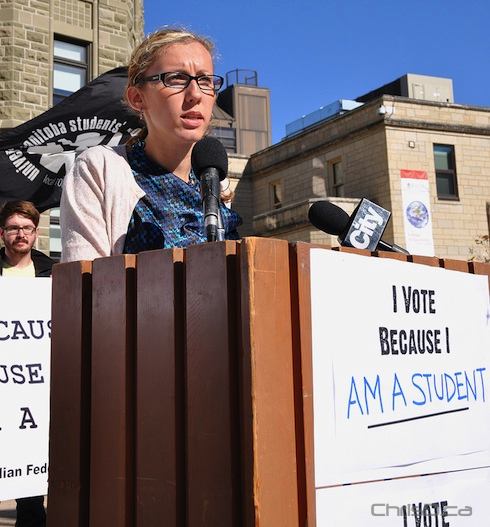 Alanna Makinson of the Canadian Federation of Students speaks during the launch of the "Students Vote" campaign in front of Wesley Hall at the University of Winnipeg on Wednesday, September 29, 2010. (MAURICE BRUNEAU / CHRISD.CA)

Post-secondary Manitoba students launched a campaign Wednesday to encourage their peers to vote in the upcoming municipal election.

“Students and young people deserve to have their voices heard and their visions made a priority in City Hall,” said Alanna Makinson, Chairperson of the Canadian Federation of Students-Manitoba. “Getting more students out to the polls will do exactly that”.

Students are facing a number of issues that they say need attention during the mayoral campaign, such as affordable housing, affordable and accessible public transportation, the continuation of the Bus Rapid Transit corridor to the University of Manitoba, the elimination of private water in municipal owned and operated facilities and accountability within City Hall.

The Students Vote campaign will also be collecting “pledges to vote” from students at all three campuses.