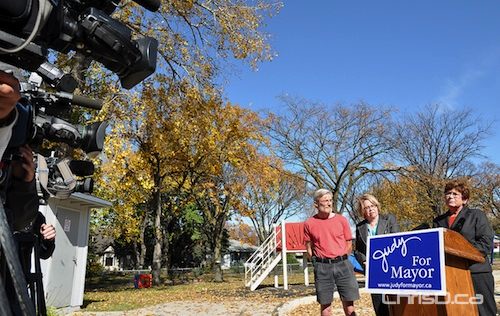 Here’s at least one thing Judy Wasylycia-Leis has in common with incumbent Mayor Sam Katz — she wants to pump more money into community centres.

The mayoral candidate says if elected she will increase programming for kids, families and seniors, while easing the burden of community centre volunteers constantly worrying about administrative paperwork.

Speaking to reporters at the Riverview Community Centre, Wasylycia-Leis announced three new initiatives to increase programming and strengthen the city’s community centres. The first is to invest $880,000 per year to pay administrative support staff to handle financial and administrative duties at community centres. This would create 22 new positions at three centres.

“These dedicated volunteers are the lifeblood of our local community centres, and they deserve our help to spend less time cutting through red tape and more time doing what they do best,” the former NDP MP said.

Twenty-two new program coordinators would also be hired at a cost of another $880,000 to help extend overstretched volunteer resources. And finally, a $1 million fund would be created to allow more community centres to remain open later hours.