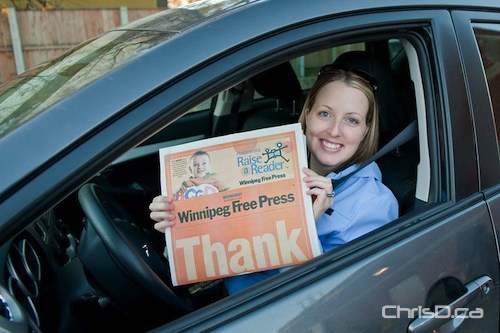 A motorist holds up a copy of a special orange edition of the Winnipeg Free Press during the Raise-a-Reader campaign on Wednesday, September 29, 2010. (TED GRANT / CHRISD.CA) 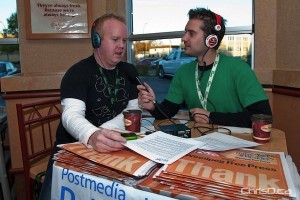 Winnipeg motorists were flanked down Wednesday morning during a campaign to raise funds for local adult literacy programs.

Staff at the Free Press were trading special orange copies of the paper for donations to the Raise-a-Reader campaign. Twenty-seven other newspapers and media outlets across Canada also participated.

Volunteers were out hitting the pavement at 24 locations across the city, and Adam Taylor and Drew Kozub from CURVE 94.3 were helping spread the word during a live remote at the Tim Hortons at 1510 Pembina Highway (left).

All money raised locally stays in the community to support literacy programs.

The national Raise-a-Reader campaign has raised $15 million for literacy in Canada since it began in 2002.