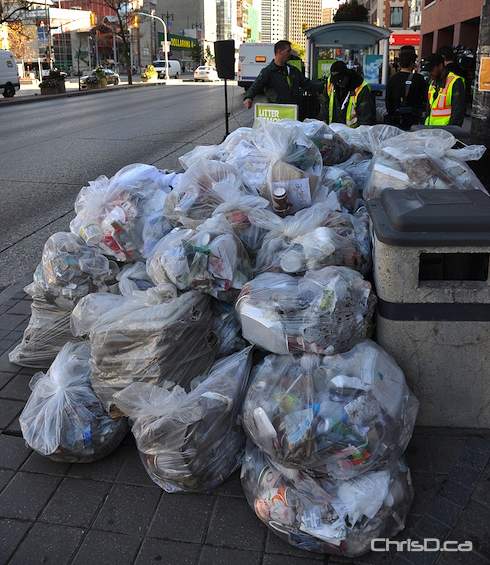 Bags of trash sit on a Portage Avenue sidewalk on Thursday, September 30, 2010 during an anti-litter campaign launch to clean up downtown streets. (MAURICE BRUNEAU / CHRISD.CA) 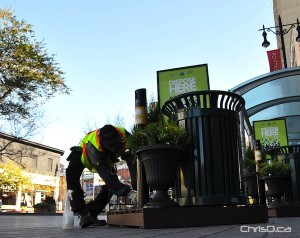 Sixty bags of litter were displayed outside of MTS Centre Thursday in a planned photo op by the Downtown Winnipeg BIZ and Take Pride Winnipeg.

The two organizations launched a campaign to target downtown litterbugs, including five modules that will house cigarette butts and waste receptacles.

The receptacles will be placed at bus stops and pedestrian hubs for four weeks to encourage people to dispose of litter in a better way. The BIZ’s Clean Team will monitor the use of the receptacles and then use the results to advocate for more waste and cigarette butt receptacles downtown.

“With winter around the corner, it’s a good reminder for people not to throw their trash on the ground,” said Stefano Grande, Downtown BIZ executive director. “The snow covers the litter and our Clean Team can’t pick it all up like they do in the summer. Come spring, there’s a huge clean up job once the snow melts to reveal the winter’s collection of litter.”

The modules will be out for four weeks at the following locations: