Spaceships, secret military craft and extraterrestrial life are just some of the intriguing topics covered in “The Big Book of UFOs.”

One in 10 Canadians have seen a UFO, according to Rutkowski, who has made numerous TV appearances, including on “Unsolved Mysteries,” “The Unexplained,” and “Sightings and Carpe Diem.” 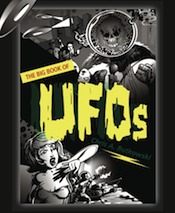 Chris Rutkowski’s name is synonymous with UFO research the world over, and this book captures his most breathtaking research, along with new and exciting accounts, that will have you questioning “are we alone in the universe?”

The Big Book of UFOs is a compendium of his best and most disturbing UFO stories for enthusiastic fans everywhere, with startling evidence to make even the biggest skeptics believe. The renowned ufologist takes us on a tour of UFOs in Canada and around the world. He has studied UFOs, aliens, abductions, and even encounters reported by kids.

Rutkowski offers many famous reports, such as the “ghost airplanes” seen over Canada’s Parliament in 1915, but also includes many exciting new cases, secret files, and statistics, as well as lots of tidbits and trivia to keep everyone excited. — Amazon.ca

The poster for the event states free parking for all saucers, but we’re assuming they’ll just hover anyway.