Home » News » Wasylycia-Leis Would Consult with Public on Bike Paths

Wasylycia-Leis Would Consult with Public on Bike Paths 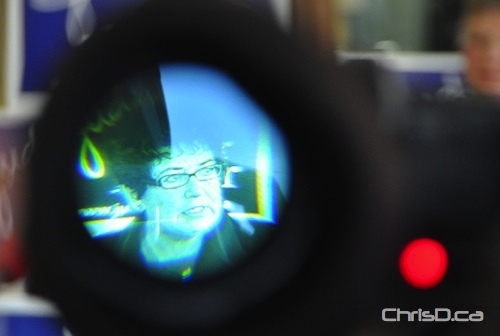 Before the city decides to create another bike path or install a large cement barrier at the end of a residential street, Judy Wasylycia-Leis wants to hear from the public herself.

The mayoral candidate pledged Tuesday to attend public meetings and consultations on any future active transportation initiatives. She also took a swipe at Mayor Sam Katz, criticizing his tactics in dealing with public outrage over recent upgrades the city has made as part of its active transportation plan.

While Wasylycia-Leis said she wouldn’t be ordering the removal of bike paths or other infrastructure if elected, she did promise to speak with concerned residents to hear their suggestions on the issues.

Most recently, residents and business owners on Assiniboine Avenue have been in a flap over the bike path being created to appease Winnipeg’s cyclists. A lawsuit over the construction of the path is currently before the courts.

A recent Probe Research poll had Wasylycia-Leis and Katz tied.