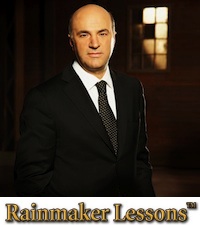 Entrepreneur and businessman Kevin O’Leary is coming to Winnipeg on Thursday, October 21 and tickets are going quickly.

The investor on CBC’s “Dragon’s Den” and ABC’s “Shark Tank,” as well as host of “The Lang and O’Leary Exchange,” will speak at the Fort Garry Hotel from 7 p.m. to 8:30 p.m. as part of the entrepreneurial speaker circuit Rainmaker Lessons.

O’Leary ruthlessly grills entrepreneurs on TV, which makes for great television, but serves to show them — and anyone watching at home — that starting a business and growing it is vastly complicated and requires much more than simply having an idea.

In 1993, O’Leary launched The Learning Company with no money at all, which developed software that helped kids with reading and math. Six years later, he sold it to Mattel for 3.7 billion dollars, making it one of the largest tech deals in Canadian history.

Over 400 entrepreneurs, sales executives and delegates from small to medium sized Manitoba businesses are confirmed to attend the event on the 21st. Doors open at 6 p.m. and Manitobans focused on business success are encouraged to get their questions ready for this self-made multi-millionaire. An audience Q&A session will follow O’Leary’s speech.

Net Proceeds from the event will be donated to the Dreamcatcher Charitable Foundation in support of developing Aboriginal Youth as future community leaders.

General admission for Rainmaker Lessons is $127. Purchase your tickets securely from ChrisD.ca below using any major credit card. Tickets will be mailed out immediately.

ChrisD.ca is a proud sponsor of this event.