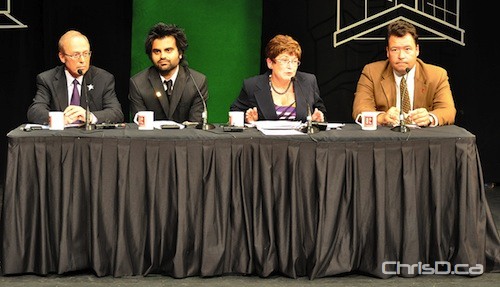 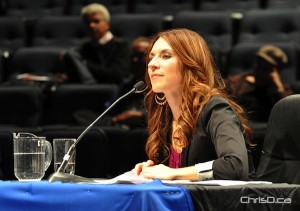 It was everyone versus Mayor Sam Katz at Wednesday night’s televised mayoral debate at the Franco-Manitobain Cultural Centre.

The incumbent mayor fielded questions from main opponent Judy Wasylycia-Leis and challengers Rav Gill and Brad Gross in the roughly one hour and 15-minute debate modered by Kim Babij (left).

The exchange between Katz and Wasylycia-Leis turned heated when the former NDP NP brought up the issue of backroom deals being made at City Hall, referring to the 30-year contract the city signed with Veolia Water Canada, a wastewater management firm. She once again accused the mayor of being secretive in not publicly releasing details of the deal.

Katz countered by asking Wasylycia-Leis to disclose her expenses from when she was an MP in Ottawa. Katz wasn’t the only one demanding those details — earlier on Wednesday, Colin Craig of the Canadian Taxpayers’ Federation requested the same documents. Craig’s request appeared to have been in the works by late Wednesday afternoon.

Wasylycia-Leis responded by sending an open invite to have Katz come and take a look at the documents himself, which she says are stored in her garage.

Both realtors did little talking in the way of policy or other hot issues like rapid transit or crime, but did take the opportunity to encourage those watching on Shaw TV to get out and vote on October 27.

The next exchange between Katz and Wasylycia-Leis is Thursday evening when the two will discuss downtown issues at Manitoba Hydro Place.