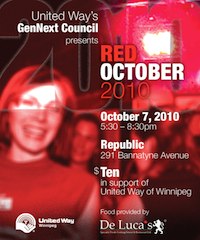 Hosted by the organization’s GenNext Council and sponsored by Red River College, the night will include magic by Anders, music by James Struthers and munchies by DeLuca’s.

Red October aims to narrow the gap between Winnipeg’s next generation of leaders and meaningful opportunities to get involved in the community.

DeLuca’s delicious cappuccino bar and treats from Sugar Mountain will be provided. Tickets are $10 each (buy online), with proceeds going to United Way’s 2010 campaign.