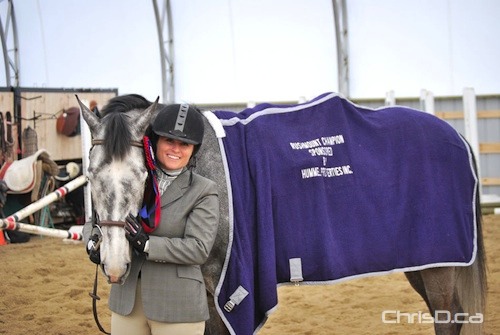 Trina Maus and her horse Lasting Freedom aka Lou. (HANDOUT) 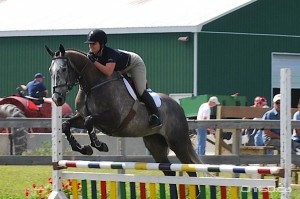 A former Winnipeg horse and his news reporter trainer are making strides and turning heads in jumping circuits throughout Ontario.

Lou is a 17hh five-year-old grey thoroughbred gelding, who before retiring from his last race at Assiniboia Downs last year, won numerous races in the United States. His accomplishments early on at the age of three attracted the attention of a Saskatchewan trainer who worked out of Assiniboia. Placing second in a photo finish at the Downs on September 20, 2009 was the end of Lou’s racing career, but the beginning of many great things to come as a show jumper after being given two months off.

“Right away I knew he was special,” Maus says of Lou. “Unlike most race horses, he has this calm relaxed attitude in the barn. Not to mention he is gorgeous.”

“The first time I sat on him I could feel how athletic he was. That became evident when we stated jumping him. He will jump everything I put in front of him — he has never been scared.”

Two months earlier than his owner would have done with any other ex-race horses, Lou competed in his first horse show on the schooling show circuit on April 18. It turned out to be a wise move, as he was the champion Green Hunter and won two firsts and a second.

In May, Lou was moved up to the .85 meter jumpers and put in the Trillium circuit, where he placed in every class against 26 other riders and finished Reserve champion in the division.

All of these accomplishments wouldn’t be possible without the expertise of Lou’s owner, Trina, who won the 1991 Canadian Title and has three Ontario championships and over 40 regional championships to her name.

“I have been riding since I could walk and started competing at seven-years-old,” Maus says, whose talent is taking ex-race horses and re-training them for the jumper ring.

Only competing in four of the nine shows in the schooling show series, Lou still managed to finish third overall for Green Hunter and third for Low Jumpers. That is simply unheard of in the horse world, according to Lou’s trainer.

There’s a bright future ahead for this champion thoroughbred, who will be moved up to the A Circuit next year and will compete in the 1.15 meter jumpers. “I have never in my 25 years of showing had a horse in his second year of showing be able to compete at that level,” Maus says. “I have no doubt he could jump at the Grand Prix height. This is one of those horses who only come along once in a life time.”

The road ahead for both Lou and his trainer is a promising one, especially considering Lou is the first horse Maus picked up since taking 10 years off to focus on her television career.

“Not a bad debut year for both of us.”

Trina Maus was a reporter and anchor for Global Winnipeg for a year before leaving last October to assume the role of /A\ News bureau chief for their Muskoka branch.