Hockey Movie to Begin Shooting in Winnipeg Next Week 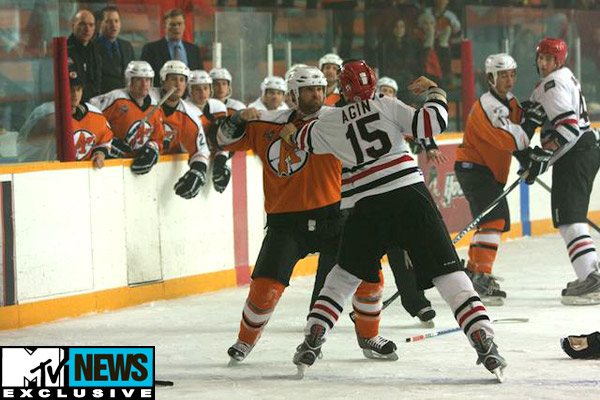 A still from the upcoming movie 'Goon.' (MTV)

“Goon” also stars Seann William Scott (above) of “American Pie” fame and Liev Schreiber from “X-Men” and most recently, “Salt.”

The flick is directed by Michael Dowse, who last directed “Fubar II” and completed “Kids In America.”

Doug Glatt, (Seann William Scott) the black sheep of an illustrious medical family is working as a bouncer when he gets roped into going to a local hockey team’s game by his hockey fanatic pal, Pat (Jay Baruchel). When Pat incites the opposing team’s chief goon to climb out of the penalty box and into the audience after him, Doug steps in and to everyone’s surprise, especially the local team’s coach, quickly puts the player down.

He is invited to a tryout with the team and after basically taking on and creaming most of his future team mates after they tease him about his somewhat basic skating abilities, he is taken aboard. He eventually acquires a modicum of skill while crushing every opposing Goon in the league. This attracts the attention of the Halifax Highlanders, the cellar dwellers in a league another rung higher in the hockey universe. They desperately need a goon to protect their star player, Laflamme (Marc Andre Grondin), who has been sent down from the NHL, having lost his nerve after a brutal altercation with a goon called Reardon (Liev Schreiber). Laflamme’s succumbed to drinking and carousing instead of getting his mojo back and the Highlanders feel the only way to kick start his recovery is to get him his own body guard. They trade for Doug and a very odd couple is born. — Alliance Films

“Goon” (IMDB) is currently in pre-production and will begin principal photography in Winnipeg on October 18.