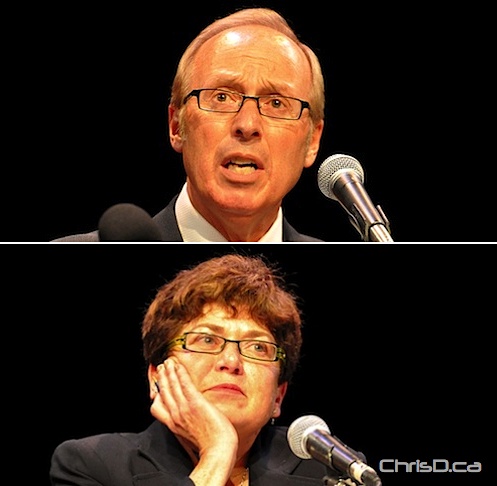 All four mayoral candidates participated in the ArtsVote Winnipeg forum Tuesday, where they discussed the city’s arts and culture community and how it would benefit if either of them is elected.

Mayor Sam Katz highlighted how he has increased arts funding by 50% since taking office in 2004, noting funding this year sits at $4.7 million from $3.1M six years ago.

Katz also discussed the idea of having public art be part of any new development by working with the private sector.

“Many developers already have taken the initiative to be proactive and implement public art as a part of their developments,” Katz said in a release.

Challenger Judy Wasylycia-Leis would take a similar approach, working with the private sector to incorporate more live-work spaces for artists, particularly in the Exchange District.

The former NDP MP would also develop a 10-year plan to strengthen and renew Winnipeg’s “cultural corridor” leading up to Canada and Manitoba’s 150th anniversaries.

Wasylycia-Leis also pledged to incorporate Wi-Fi in public areas where the city’s creative and cultural industries are located, implement free or low-cost transit for school classes on arts and culture field trips and use funding from the sale of the Winnipeg Square parkade to create new space for the city’s arts and cultural organizations in multi-storey, mixed-use facilities.

The Winnipeg Arts Council says 6% of employed Winnipeggers work in the city’s arts and creative industries.