Home » News » Katz Fires Back at Accusation He Would Eliminate Pensions

Katz Fires Back at Accusation He Would Eliminate Pensions 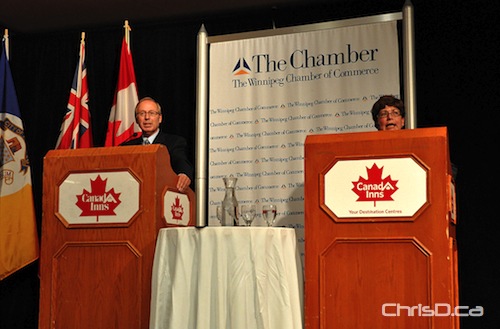 Judy Wasylycia-Leis and CUPE came under fire Wednesday during an afternoon mayoral forum put on by the Winnipeg Chamber of Commerce. The topic? Pensions.

Speaking to members of Winnipeg’s business community at Canad Inns Polo Park, Katz accused the mayoral candidate and the Canadian Union of Public Employees of using scare tactics to turn voters against him.

Katz said he had received a call earlier on Wednesday from a senior citizen who was worried about her husband losing his CUPE pension if he is re-elected. According to Katz, CUPE is making phone calls on behalf of his main opponent and spreading mis-truths over the security of pensions if the incumbent mayor wins a third term.

The former NDP MP responded by not knowing anything about the phone calls and said she isn’t endorsement by CUPE.

The accusation comes days after the Katz campaign unleashed a series of robocalls last Friday stating low income earners would lose their homes if Wasylycia-Leis is elected and increases property taxes.

The two will verbally battle again on Thursday in the CBC Manitoba/Winnipeg Free Press debate from 5-6 p.m.