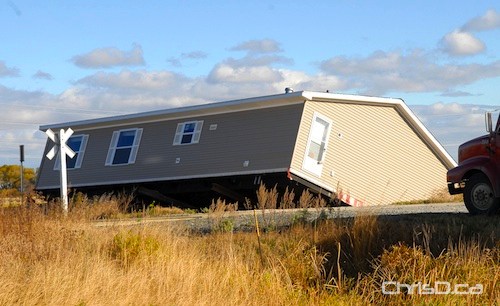 A house being transported on a trailer slides into the ditch on Inkster Boulevard on Thursday, October 14, 2010. (STAN MILOSEVIC / MANITOBAPHOTOS.COM)

The driver of a trailer hauling this home was likely red-faced Thursday when his load tipped and slid into a ditch.

The mishap happened on Inkster Boulevard about 5 km west of the Perimeter Highway at the corner of Highway 334 and PR 221 at around 11 a.m.

According to a witness, it appears the truck went over the railway tracks too fast, rocking the load and eventually losing it.