Home » Columns » Your Election Words of the Week: Cracker Barrel

Your Election Words of the Week: Cracker Barrel 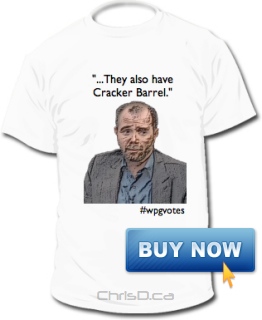 One of the most notable quotes so far during the civic election campaign came Thursday evening during the CBC Manitoba/Winnipeg Free Press Mayoral Forum.

Bart’s line quickly spread like wildfire on Twitter, where tweeps were then discussing various American restaurant chains over the public vs. private sector.

So, we decided to whip this T-shirt up, with all net proceeds (25%) going to the Luxton Community Centre on St. Cross Street. The funding originally allocated to the waterpark project was redirected from Kildonan Park. Luxton is the closest community centre to that location. Buy a shirt.

*The T-shirt design does not include the ChrisD.ca watermark.