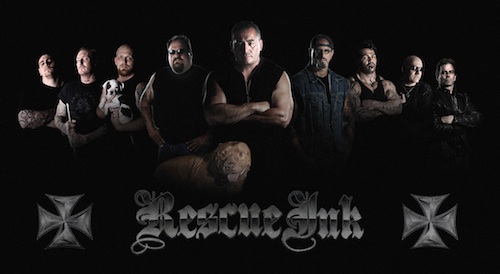 ChrisD.ca reader Melissa took in the Rescue Ink tour in Winnipeg last weekend and was more than happy to share her experience. Melissa is the mother of three adopted dogs herself and connected on a personal level with what the U.S.-based rescuers are on a mission to accomplish. Read her encounter below.
— — —
The weekend was fantastic! Winnipeg and the surrounding areas have animal over population numbers on an ongoing basis. There are many rescues in our provinces and all over Canada and the U.S. that work day and night to make a difference.  Rescue Ink coming to Winnipeg was about informing people to spay and neuter, be a responsible pet owner and a way for the rescues to work together for what is best for the animals.

The team was brought in by Hull’s Haven Border Collie Rescue, as well as many other supporters, sponsors and donors, to build the unity of rescues and the betterment of animals in our city and awareness of how many all the rescues have.

The weekend was a success beginning with a special meeting at the airport where Mayor Sam Katz and his team welcomed all to Winnipeg. Members that came in were Joe Panz, Big Ant, Johnny O. , Scott the Knife , Alley Cat, Stevie D., Den Mom Mary, as well as dogs Rebel and Jordan.

A meet and greet at Lone Star Harley Davidson took place, where Big Ant was loaned a Harley and left his mark in the form of a perfect donut burnout.

Saturday was the Rockin’ with Rescue Ink Rescue Fair and Exhibition. This event showcased 20 rescue and advocacy groups, where adoptions occurred for Bright Eyes Dog Rescue from Saskatchewan, Manitoba German Shepherd Rescue, Rescue Siamese and Hull’s Haven Border Collie Rescue. Funds were raised for groups like Manitoba Emergency Response for Animals to be able to make trips and save animals. Fans lined up for pictures with the guys and Joe and his crew addressed the crowds a couple times during the day. Nothing but great things have been said about these guys as well as their pups Rebel and Jordan.

Saturday night was an intimidate dinner with Rescue Ink held at Chef Dario. I think it’s fair to say that all that attended had a one of a kind memorable experience.

Sunday, Rescue Ink Make a difference in our city working with the next generation. The morning began with a fundraising breakfast at Garden City Collegiate.

Sunday afternoon was a memorable experience for the men of Rescue Ink and the kids of Rossbrook House and their affiliates. The men took time meeting the kids, presenting information on how they can be tough and do the right thing. The children got to meet rescue dogs and see how first hand they could make a difference as the next generation.

Photos of the visit can be seen on the Hull’s Haven Border Collie Rescue Facebook page.