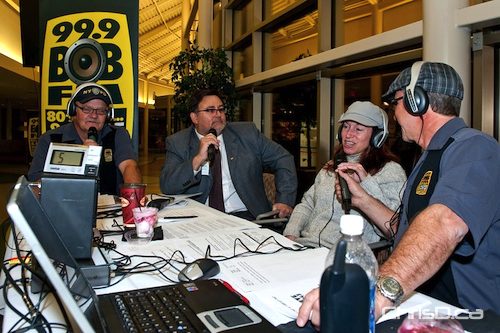 Beau, Tom and Frazier of 99.9 BOB FM do a live remote from the St-Boniface Hospital Foundation Radiothon of Hope and Healing on Thursday, October 14, 2010. (TED GRANT / CHRISD.CA)

A 13-hour radiothon on Thursday to raise money for the St-Boniface Hospital Foundation (SBHF) was so successful that phone lines stayed open all day today.

Spokesperson Laura Dickie says there was an overwhelming response and donations were still pouring in Friday morning.

The SBHF has raised more than $750,000 for patient care programs over the past eight years through its radiothons. Despite the shaky economy, the community has always pulled through every year to make a donation, which ultimately provides health care services to those who most rely on them.

Other key areas that will benefit from donations include the Cardiac Sciences Program, the Mental Health Program and the Woman and Child Program.

A final total from this year’s radiothon is expected to be released on Monday.