Home » News » Protest Planned for Sunday’s U of W Convocation

Protest Planned for Sunday’s U of W Convocation 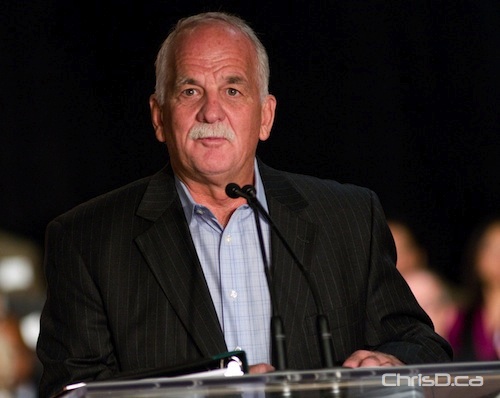 The University of Winnipeg’s Fall Autumn Convocation on Sunday won’t come without a little controversy.

Besides students being handed their degrees, including an honorary degree being awarded to Larry Updike, Public Safety Minister Vic Toews will receive an honorary Doctor of Laws. And there lies the controversy.

A group of students opposed to Toews receiving this honour have organized a protest outside of the convocation hall to voice their concerns.

“We believe that Toews is not deserving of this degree due to his heinous positions,” an e-mail from student Brittany Thiessen read. “He is opposed to same sex marriages, he is opposed to sexual orientation being protected by hate crimes legislation, he supports the American style war on drugs, he is not opposed to imprisoning 10-year-olds, he is planning to spend millions on prison expansion at a time when crime rates are decreasing, he is in favour of recriminalizing abortions and eliminating a woman’s right to choose.”

The group says they feel Toews’ positions contradict the values of the university.

The U of W’s 93rd convocation will take place at the Duckworth Centre from 2 p.m. to 4 p.m. on October 17 and will award degrees in Graduate Programs, Theology, Science, Education, Arts and Business Administration.

Minister Toews also plans to address the graduates following his acceptance of the honorary degree.

← Previous: WHS Offering Cats at a Reduced Price This Weekend Next: Your Election Words of the Week: Cracker Barrel →
Tags: Crime | University of Winnipeg