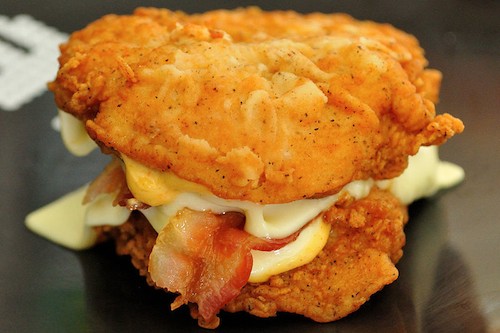 Arteries across the country will be clogged today as the new KFC Double Down sandwich debuts in Canada.

If you’re a vegetarian, stop reading now, because this will make you squeamish in no time.

The Double Down is a famous sandwich that’s been popular in the U.S. since it launched last year — selling more than 10 million in less than a month.

Where you would normally have two pieces of bread for the bun, two boneless chicken fillets take its place.

The centre contains two pieces of bacon, two slices of processed pepper jack cheese and sauce in between.

KFC says they brought their sloppy sandwich north of the border after Canadians requested it. It will be sold here for a limited time until November 14.

A spokesperson from the company told ChrisD.ca in an e-mail, “At that time we will evaluate the market and see whether or not to extend the promotion.”

Translation: If you want it to stay beyond November 14, you better buy more than just one … along with a gym membership.