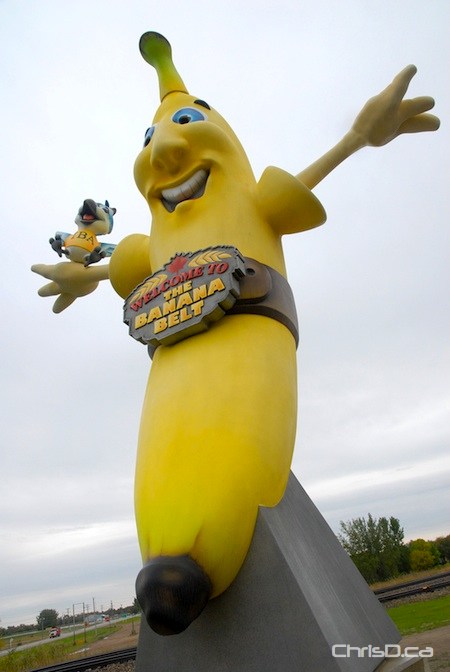 The famous banana and blue jay statue in the town of Melita is no longer nameless after a campaign was launched to name the large attraction.

On Monday, town officials revealed Sunny the Banana and Breezy the Blue Jay.

The names were chosen with the help of local businesses, organizations, families and individuals who went through a list of over 140 names last Friday to narrow down the choices. A short list of three names for the banana and blue jay were formed, before the final vote came down.

The 33-foot banana and 6-foot-tall blue jay were unveiled on August 7 at the corner of Front Street and Highway 83 as a symbol for the town’s warmer temperatures.

The local tourism committee has big plans for Sunny and Breezy. “For starters we are working on creating signage and developing this meeting place into a welcoming green space,” said committee member Bob Brown.

← Previous: Construction Worker Dies After Being Hit by Vehicle Next: U of M Graduating Over 1,300 Students at Fall Convocation →
Tags: