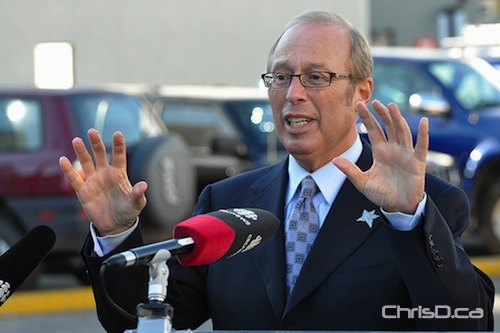 Incumbent Mayor Sam Katz has pledged to put $57,000 into Downtown Winnipeg BIZ events, including the successful Ciclovia festival and Lights on Broadway.

Speaking in front of the Fort Garry Hotel Wednesday afternoon, Katz said the one-day Lights on Broadway event would be extended to four days if re-elected. The announcement was part of the mayor’s efforts to bring more people to downtown Winnipeg.

“Ciclovia is an amazing event that brings out thousands of Winnipeggers for a wonderful experience in the heart of our city — a day in which cars are replaced with strollers, runners, rollerblades and bikes,” said Stefano Grande, Downtown BIZ executive director. “What better place to celebrate active transportation than in arguably the most beautiful and pedestrian-friendly neighbourhood in our city: Broadway, in our downtown.”

The city already provides $40,000 in funding to Ciclovia and this new investment would be added on to help promote use of Winnipeg’s Active Transportation network citywide.

Katz also committed to more than double the street closure budget from $47,000 to $100,000 to allow more organizations to host community events.

Voters head to the polls one week from today.