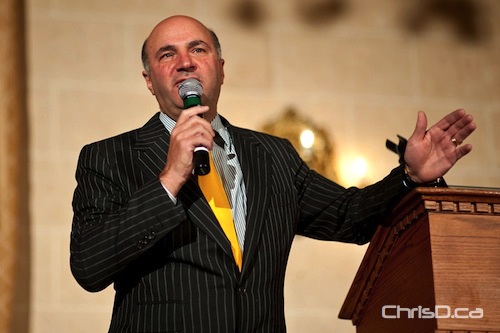 Canadian businessman and entrepreneur Kevin O’Leary offered his wisdom to local self-starters and executives alike Thursday evening during a speech at the Fort Garry Hotel.

“I’ve been rich and I’ve been poor … rich is better,” O’Leary quipped to the packed room of wide-eyed business enthusiasts.

The panelist and no nonsense investor on CBC’s “Dragons’ Den” spoke for roughly an hour and a half on what it takes to succeed in the business world and offered up insider tips to creating the next big thing. O’Leary said every successful entrepreneur has an obligation to pass on their knowledge to future generations, and also emphasized not focusing on your strengths, but recognizing your weaknesses.

Growing up as a child with dyslexia, O’Leary could only read books if he turned them upside down, thus leading him to enter a pilot program to assist children similar to him. The unusual talents of his peers were praised and was a tremendous confidence booster to O’Leary in his early years.

Last night’s session was part of Rainmaker Lessons, an entrepreneurial speaker series circuit featuring some of the top business minds in the country.

O’Leary is also a co-host on the popular CBC News Network show “The Lang & O’Leary Exchange.”