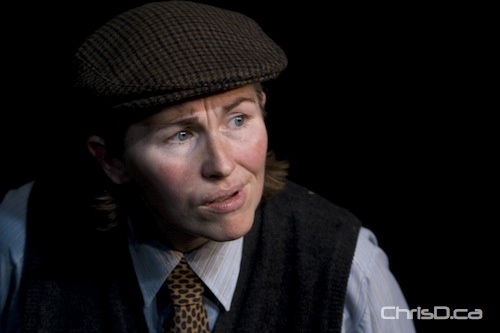 The MTC Warehouse is kicking off its season with a performance of Jake’s Gift, a production that was sold out daily at the Winnipeg Festival Theatre Festival.

The Tom Hendry Theatre will act as the venue for this piece featuring actor Julia Mackey, who will take the audience back to the place where Canadian heroism made the history books — Juno Beach.

Canada’s pivotal role in the D-Day invasion of France has long been legend. The lives lost and the horrors encountered are often glossed over as history remembers the successes of the troops. However, for Jake, the veteran who returns to Juno Beach for the 60th anniversary of D-Day, it was not only a day of heroism, but of loss. Julia Mackey’s “Jake’s Gift” takes a lofty concept — the important of remembrance — and makes it intensely personal by telling the story behind one soldier’s grave.

Mackey not only has the role of playwright, but also stars as Jake, Isabelle, Grande-Isabelle and Susan in the play. The creative team consists of director Dirk Van Stralen and features the work of lighting designer Gerald King.