Escape Artist Gunnarson to Be Buried Alive on Friday 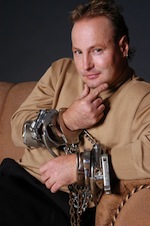 Winnipeg escape artist Dean Gunnarson will attempt to cheat death once again during a daring stunt on Friday in the spirit of Halloween.

Gunnarson will be locked inside a steel coffin and buried six feet underground for two days. The lid to the coffin will be locked and wrapped in chains. Over three tonnes of dirt will be dumped on top to ensure he doesn’t escape.

Gunnarson must stay underground with no food or water for an entire two days before attempting to break out. On Sunday, October 31 at 1:26 p.m., he will begin to make his escape. The time of 1:26 p.m. is when Harry Houdini died in 1926 on the same day.

“I know that from a physical and mental stand point this will be my most challenging escape ever,” Gunnarson said in a release. “The last time I was locked in a coffin I died. I never wanted to be in another one and I never have. I will have to conquer all my personnel fears and demons to make this escape on Halloween.”

In 1983, Gunnarson was underwater for nearly four minutes when the coffin he was in was raised back out and rescuers found his blue lifeless body. He was revived at the Health Sciences Centre, which has made Gunnarson even more determined to do what others have said is impossible.

Gunnarson recently returned from China, where he had a close call while being chained down to a track.

Cameras will be mounted inside the coffin so spectators can monitor the stunt during the two days on giant screens outside the Golf Dome. Saturday will be family day at the Dome, with a petting zoo, paint ball, archery, pizza, face painting, and more. Saturday night will be a special Halloween party with free admission when you make a donation to the Christmas Cheer Board. More information is available at CanadianEventsCalendar.com.