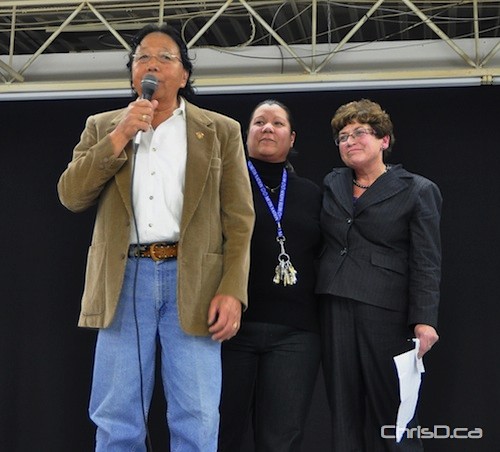 John Lee, vice president of the Indian & Metis Friendship Centre, and Nancy Flett, mother of Joseph "Beeper" Spence, who was killed by gang violence in 1995, speak during a rally Monday, October 25, 2010 with mayoral candidate Judy Wasylycia-Leis at their side. (MAURICE BRUNEAU / CHRISD.CA)

Residents living in Winnipeg’s crime-ridden North End stood up Monday night to the violence that shook their area on Saturday.

Three people were shot, leading to the deaths of two men and leaving a 13-year-old girl in hospital with upper body injuries.

Joined on stage by mayoral candidate Judy Wasylycia-Leis, residents came together at the Indian & Metis Friendship Centre on Robinson Street to rally against violence and share their stories on how crime has impacted their lives.

One of those people who spoke was Nancy Flett, the mother of Joseph “Beeper” Spence, who was gunned down in July 1995 at the age of 13. Known simply as “Beeper” to friends, Joseph was killed in a drive-by shooting after being mistaken as a rival gang member.

Winnipeg police appealed to the public Monday to come forward with any information on Saturday’s killings that may be useful in their investigation.

A description of the suspect, or suspects, was provided earlier in the day.