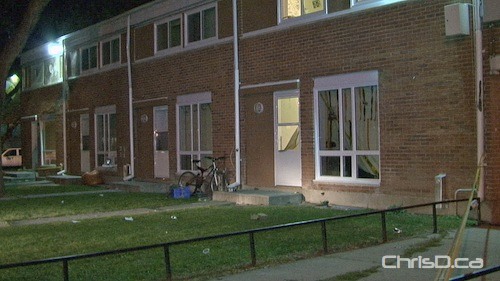 A 13-year-old girl was wounded after gunfire rang out at this housing complex in the 200 block of Stella Walk on Saturday, October 23, 2010. (SHAUN MCLEOD)

The three shootings that rocked the North End on Saturday night still haven’t led police to a suspect, but a detailed description of the man believed to be responsible for at least one incident has now been released.

Police are looking for a male in his late teens or early 20s, Aboriginal in appearance and approximately 6 feet tall with a skinny build. The suspect is being sought in relation to the shooting in the 200 block of Stella Walk that left 13-year-old girl in critical condition at around 8:25 p.m. She has since been upgraded to stable condition.

The second shooting occurred at about 8:40 p.m. in the 400 block of Dufferin Avenue, claiming the life of 35-year-old Thomas Beardy of Winnipeg.

The suspect in this incident is described as an adult male or female who was wearing dark clothing.

At about 9:15 p.m., a third person was shot in the 400 block of Boyd Avenue, which killed 52-year-old Ian Layton MacDonald of Winnipeg.

The suspect in this case is described as an Aboriginal male about 5’8″ tall and wearing dark clothing. He may have been accompanied by a woman.