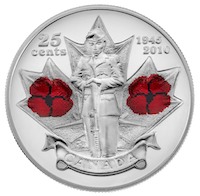 The 2010 coin will mark the 65th anniversary of the end of the Second World War.

A special ceremony at the Mint, 520 Lagimodiere Blvd., is set for 10 a.m., which will include members of the Canadian Forces and the Government of Canada.

Following the ceremony a public coin exchange will take place, where guests can exchange their change for a 2010 25-cent poppy coin.