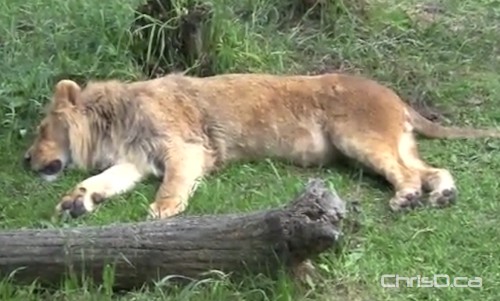 A lion takes a nap in Assiniboine Park Zoo's "Pavilion of the Lions" exhibit during its official opening on June 15, 2010. (CHRISD.CA)

The Assiniboine Park Zoo’s new “Pavilion of the Lions” enclosure has won a top national award for being the best new animal exhibit in Canada.

The Canadian Association of Zoos and Aquariums awarded the zoo with the Baines Award for outstanding achievement, after deciding the zoo’s lion exhibit was an innovative exploration of the lion’s evolution, ecology, conservation, as well as prehistoric and historic relationships with people.

“We’re absolutely thrilled to have this exhibit recognized in such a special way,” said Bob Wrigley, the zoo’s curator. “Pavilion of the Lions is just one element of a massive redevelopment plan for the Assiniboine Park Zoo so we’re proud to say this is the first of many stellar improvements in the works.”

At an awards ceremony in Montreal, the exhibit was described as combining the best in animal care with a design that maximizes the visitor experience.

The zoo is also planning an exciting educational program called “ZoosnooZ — Snore and Roar,” where children can have a sleepover with the lions.

The exhibit held its official grand opening on June 15.