Winnipeg North Candidate Vows to Crack Down on Crime 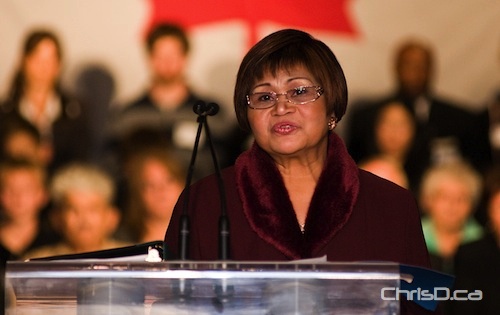 Conservative Julie Javier is promising to work with the Harper government to get tough on crime if elected to Parliament during the November by-election.

The Winnipeg North candidate is speaking out after Saturday’s violent shootings that killed two men and sent a 13-year-old girl to hospital.

“Crime is a very serious issue in this city, and it has been for far too long,”Javier said in a statement.

Javier says the Conservatives are the only political party committed to giving police the tools they need to combat organized crime and the drug trade.

“It’s very unfortunate that members of the Coalition parties, the Liberals and NDP, do not believe crime is a serious issue. Crime has plagued our community for too long. This horrible tragedy is another example of why we need to get tough on crime.”

NDP candidate Kevin Chief is also in the running to claim the Winnipeg North spot as MP, pledging to “carry on Judy Wasylycia-Leis’ record of results.”

Voters in the riding head to the polls on Monday, November 29. A by-election was also called in Dauphin–Swan River–Marquette.