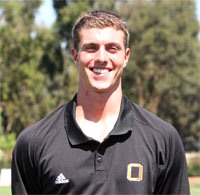 Less than a day after signing quarterback Frank Wilczynski, the Winnipeg Blue Bombers have added another import QB to their practice roster.

Justin Goltz comes to the Blue and Gold after being drafted by the Sacramento Mountain Lions of the UFL earlier this year, where he was eventually cut.

The Missouri native attended training camp with the Detroit Lions in 2009 and was a three-year starter at Occidental College, where he held an undefeated record as a senior.

Goltz completed 66% of his passes for 1,832 yards and added 599 yards rushing that year while also throwing for 11 touchdowns against just three interceptions and led the Tigers to their third SCIAC championship in four seasons.

In 2008, he was named the Southern California Intercollegiate Athletic Conference Offensive Player of the Year.