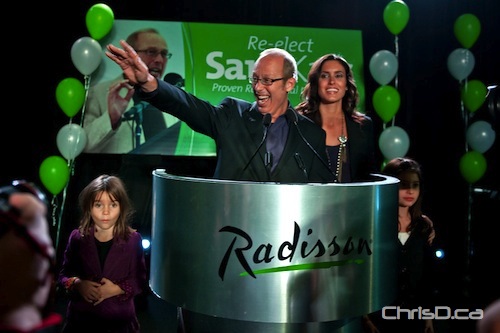 Sam Katz, with girlfriend Leah Pasuta and his two daughters, Kiera, 5, and Ava, 9, by his side, addresses the crowd of supporters at the Radisson Hotel on Wednesday, October 27, 2010 after winning a third term as Winnipeg's mayor. (TED GRANT / CHRISD.CA) 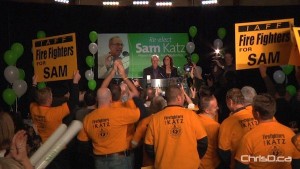 Mayor Sam Katz kept his title Wednesday night, clinching 55% (116,308) of the vote in the 2010 civic election while celebrating at the Radisson Hotel downtown.

The incumbent Winnipeg mayor battled former NDP MP Judy Wasylycia-Leis, who quit her job in Ottawa to take a run at the city’s top job in May. Wasylycia-Leis was trailing for most of the night as poll results began to come in shortly after 8 p.m. and ended up receiving 90,913 votes with 43%.

Weeks of campaigning and endorsements from some big names, including a backing by the Winnipeg Police Association, appeared to have paid off for Katz’s promise to hire 58 additional police officers to help curb the city’s relentless crime problem. Katz also garnered the support from the United Fire Fighters of Winnipeg, among others.

Katz campaigned with public safety in mind, also committing to boost resources to Winnipeg’s 911 call centre. Critics accused Katz of using his role as mayor to acquire information that there was a shortage in the first place. Just one week later, city council passed a vote to hire 19 more operators to handle 911 calls at a cost of $1.2 million next year.

In his last campaign announcement on October 20, Katz promised to fund the city’s street festivals, such as Ciclovia and Lights on Broadway. He also committed to more than double the street closure budget from $47,000 to $100,000 to allow more organizations to host community events.

Accompanied by girlfriend Leah Pasuta Wednesday morning, Katz cast his ballot at Shaftesbury High School shortly before 10 a.m. He was confident going in, but had a plan in his back pocket just in case he didn’t win a third term. Speaking to reporters outside the voting hall, Katz said he would be spending more time with both of his daughters and also at the Winnipeg Goldeyes’ offices, where he is currently owner of the American Association baseball team.

A total of 47% of the population came out in the blistering weather Wednesday to make their voice heard. To see which school trustrees won, visit the city’s election website.