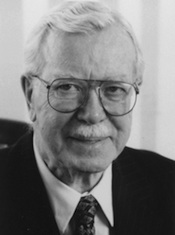 The province’s 14th premier will be honoured at the appropriately titled 2010 Duff Roblin Tribute Dinner on Tuesday.

Voted the Greatest Manitoban, Duff Roblin will have his legacy front and centre at the Fort Garry Hotel during a dinner hosted by the University of Winnipeg Foundation

Roblin’s accomplishments are extensive, but he is perhaps most well known for being instrumental in the creation of the Red River Floodway, which received the nickname of “Duff’s Ditch.”

Proceeds from the evening will go towards the Duff Roblin Scholars Fund in support of the Graduate Student Fellowships in Aboriginal Governance at the University of Winnipeg.

← Previous: Winnipeg Woman to Be Honoured for Haiti Rescue Efforts Next: Students Experience Halloween as a Homeless Person →
Tags: University of Winnipeg