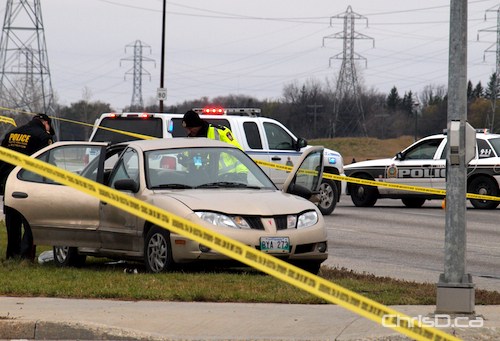 A 17-year-old girl was killed in the two-vehicle crash at the scene, while a 19-year-old woman passed away in hospital, police said on Monday. Both were recent graduates of Dakota Collegiate.

Both victims were travelling in a Pontiac Sunfire heading southbound when they were T-boned by a westbound travelling Chevrolet Cavalier.

The accident happened shortly before 3 a.m. at the intersection of Bishop Grandin and St. Mary’s Road.

Two other occupants in the Sunfire were treated for non-life threatening injuries, while an 18-year-old woman remains in critical condition.

The group of friends were returning home from a Halloween party at the Level II Niteclub on Portage Avenue.

Preliminary details of the investigation suggest the Cavalier may have ran a red light.

Police say speed is also being investigated as a factor in the crash.

There have been 17 fatalities on Winnipeg roads so far this year, including Sunday’s deadly collision.