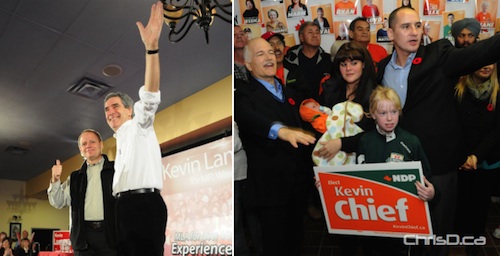 A by-election set for November 29 in Winnipeg North is heating up as two candidates received the backing of party leaders over the weekend.

The two Kevins are both vying for the vacant seat left by Judy Wasylycia-Leis, who gave up her seat to unsuccessfully run for Winnipeg mayor in May.

The main topic Saturday was crime, as the area is still rattled by the recent rash of violence which left two men dead and severely injured a 13-year-old girl in three shootings on October 23. Both candidates addressed the issue, saying they would make it their priority to clean up the north end of the city.

Conservative candidate Julie Javier is also running in the by-election and pledged to crack down on crime last week.