Home » News » Woman Sent to Hospital After Crash on McPhillips

Woman Sent to Hospital After Crash on McPhillips 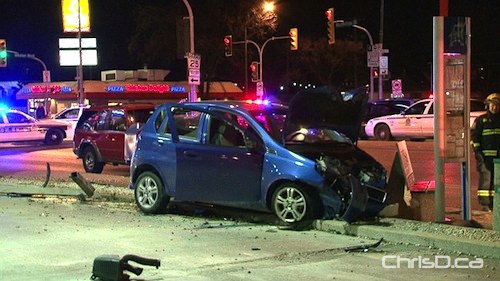 A Chevrolet Aveo sits damaged after crashing into a gas station at McPhillips Street and Inkster Boulevard on Wednesday, November 3, 2010. (SHAUN MCLEOD)

A woman was sent to hospital Wednesday night in critical condition after her car crashed into a gas station at around 8:30 p.m.

The accident happened at the corner of McPhillips Street and Inkster Boulevard.

A witness on scene says the driver was heading southbound at the time and allegedly ran a red light.

The woman’s condition had since been upgraded to stable.

No other vehicles were involved.