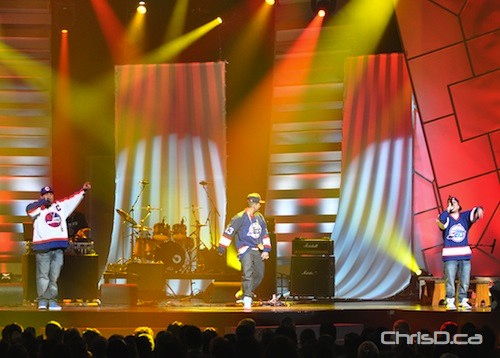 Aboriginal music talent shined Friday night at MTS Centre as the 5th annual Aboriginal Peoples Choice Music Awards were given out as part of the annual Manito Ahbee festival.

The five-day festival began on Wednesday with a number of Manitoba acts picking up awards prior to Friday’s big show.

The highlight of the festival came last night, when the televised event hosted by actor Lorne Cardinal went live on the Aboriginal Peoples Television Network (APTN).

Local band Winnipeg’s Most picked up the award for Best New Artist, while other hometown acts walked away empty handed, but not without being nominated, which is a honour in itself.

Winnipeg’s Don Amero was nominated for Best Pop CD titled “Deepening,” while a slew of Manitoba acts were all nominated in the Best Country CD category, including Darrelyne Bickel for “M.I.A.,” Desiree Dorion for “Soul Back Jack,” Jerry Sereda for “Campground Cowboy,” and Kimberley Dawn for “Built That Way.”

Other winners from Friday night included:

Sixty countries were represented in both voting rounds, which were narrowed down to 107 submissions from 73 artists in the final round.

View the photo gallery below:

To see what else is happening this weekend as part of Manito Ahbee, visit ManitobaAhbee.com.