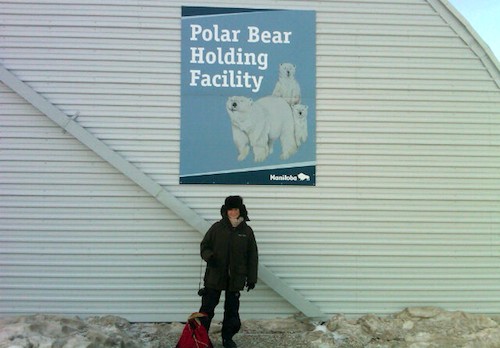 Martha Stewart tweeted this photo Friday of the holding facility polar bears arrive to in Churchill, Manitoba before being taken back into the wild. (YFROG.COM)

Homemaker and entrepreneur Martha Stewart is in northern Manitoba this weekend to visit the polar bears.

Stewart landed in Churchill on Friday and is visiting the nearby Wapusk National Park.

On her Twitter page, Stewart has been posting photos of her journey. Her last update was Saturday morning, where she mentioned plans to board a tundra buggy to see the polar bears in the park.

Besides exploring the wildlife, Stewart has also been indulging her sweet tooth, visiting the local Gypsy Bakery. Early Saturday morning, she tweeted a photo of the baked goods offered at the establishment, where she says her and the crew ate breakfast.

The weather in the northern Manitoba community hasn’t been too frigid for the domestic diva. Temperatures earlier today reached 4°C, but are expected to dip for Sunday with a high of -4°C.

According to a press release, Stewart is expected to attend an event tonight hosted by Polar Bears International.

No word on how long Stewart plans to remain in Churchill.