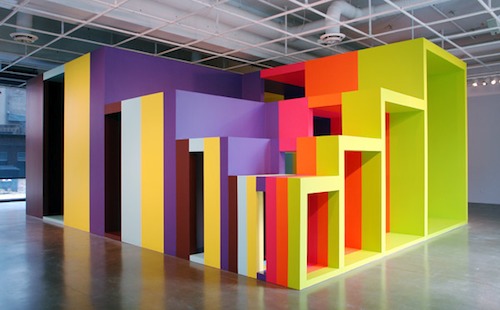 A sample of LaTourelle's previous work, titled "Model of an interior expansion,” is shown in Montreal. (CENTER DESIGN)

Renowned artist Rodney LaTourelle will officially open his installation Chronochroma 6 in the Centennial-Duckworth Corridor on the University of Winnipeg campus this afternoon.

The Winnipeg-born artist, who currently resides and works in Berlin, has had his work exhibit in Russia, Germany, Poland, at the National Gallery of Canada (Ottawa), and L’Université du Québec à Montréal (Montreal).

In 2008, the U of W invited LaTourelle to transform the Centennial-Duckworth passageway into a more welcoming space. Latourelle is known for his immersible polychrome art environments, and he decided to enliven the hallway with a wide range of contemporary colours.

His work is known for exploring potential mood-altering effects using colour, which he has included in this latest project. There is also a dynamic optical illusion, as the trusses seem to expand and shrink.