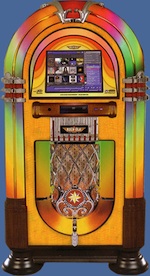 A film following the works of a made-in-Manitoba musical legend will make its homecoming debut in Virden next Thursday.

David C. Rockola was famous for manufacturing the iconic jukeboxes in 1935 that now bear his name. The Rock-Ola, along with the Wurlitzer, Seeburg and AMI models, became a work of art in its own right. Collectors around the world covet, stalk and restore the best of these glowing neon temples of tunes.

Dave Gaudet is one of the many collectors of the Rock-Ola and created a documentary that follows his journey to locate the elusive Rock-Ola 1428 model and load it with entirely made-in-Manitoba hits, including music from Burton Cummings, Randy Bachman, Neil Young, Tom Cochrane and Ray St. Germain.

“Drop the Nickel” is a documentary from Winnipeg’s Farpoint Films and Scotfree Productions, that follows a quest to locate the jukebox and fill it with hits that defined generations.

The film is currently available on MTS Winnipeg On Demand, but will screen at the Aud Theatre in Virden on Thursday, November 18 at 7 p.m. Admission is free.

The 45-minute long film will be followed by a reception and Q&A session with the director, Scott Leary.