The 101st Santa Claus Parade will take over Portage Avenue Saturday evening, and marks the official start of the Christmas season for many.

Floats have been prepped for months and volunteers are preparing to line the parade route decked out in holiday gear.

The weather will be a bit chilly, so better bring a toque or scarf just in case. To help keep you warm, hot chocolate will be available on every block along the parade route.

The fun is set to begin at 5 p.m. at Portage and Young Street, making its way down Portage and ending at Main Street and Graham Avenue.

More than 30,000 people are expected to converge on the streets of downtown Winnipeg tomorrow, creating the possibility for a traffic nightmare. Parkades have been outlined on the Santa Claus Parade website and street closures have also been noted to eleviate any congestion. 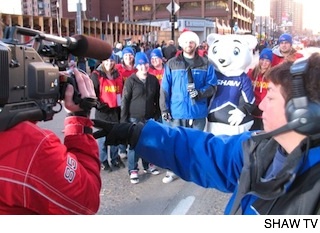 Shaw TV will go live with its sixth consecutive broadcast from the parade. Joanne Kelly and Laura Reavie will be commentating from the booth, with Kim Babij down on the street talking to parade-goers on the floats. Coverage will begin at 5 p.m. and end when the parade does — one of the benefits of not having any time constraints.

Children are encouraged to bring their letters for Santa, as elfs will be collecting them along the parade route to deliver to the big guy.

The Christmas Cheer Board will be accepting non-perishable food items and new unwrapped gifts, while Share the Warmth is seeking warm winter wear, including coats, parkas, hats, toques, mittens and scarves for all ages. Drop off bins will also be available on each block.

Afterwards, stay downtown for plenty more family friendly activities, including the Manitoba Moose game, as they take on the Rochester Americans at 7:30 p.m. The Winnipeg Symphony Orchestra will also be presenting Mozart and Strauss, part of its Masterworks series at 8 p.m. Entertainment will also be happening under the canopy at The Forks at 7 p.m. with local bands, and an amazing three-storey light installation will feature unique 3D graphics and animations projected on the side of Johnston Terminal.