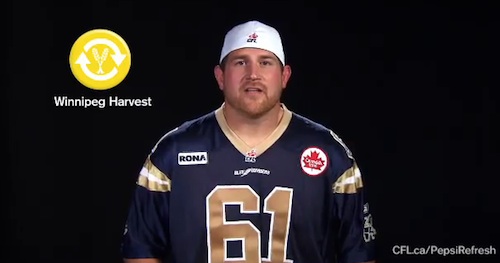 For the last month, Blue Bomber lineman Luke Fritz has been competing to win a $50,000 grant from Pepsi in support of Winnipeg Harvest.

Fans have been voting for their favouriate participating CFL player and our own Luke Fritz is in the final two.

Fritz is now up against Saskatchewan Roughrider Rob Bagg to determine who will win the $50,000 grant on November 24.

Fans can vote at CFL.ca for Fritz to win the big prize. The grant will help feed the 19,000 children that rely on Winnipeg Harvest each month.