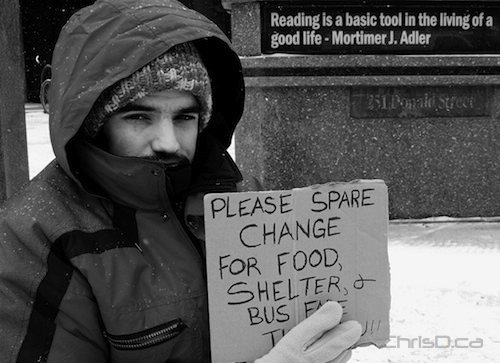 Winnipeg drivers could soon be seeing an end to panhandling on medians and boulevards when a city councillor brings up the issue on Monday.

St. Vital Councillor Gord Steeves will ask the city’s protection committee to consider banning or restricting panhandling on roadways, including in traffic.

Steeves says it’s dangerous for both motorists and those doing the begging and there needs to be a bylaw put in place to curb the practice.

City Hall looked at the issue several years ago, but nothing came of the enforcement rules used to stop such a problem.

The argument of safety will be made, in that panhandlers obstruct the visibility of drivers and can be intimidating to some, including the act of tapping on a window or hood of a vehicle to get drivers’ attention.

If the move gets the go-ahead, recommendations could be made in the next few months on how to amend the current panhandling bylaw.

← Previous: Lost Children Will Have Meeting Places at Santa Parade Next: Winnipeg Monuments to Be Lit Up for World Diabetes Day →
Tags: