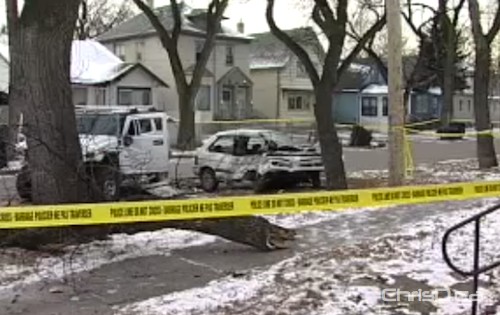 This crash on Friday, December 11, 2009 killed Zdislaw Andrzejczak when a stolen Hummer collided with his car in the 500 block of Alfred Avenue. (GLOBAL WINNIPEG)

The family of a 47-year-old Winnipeg man killed last December by a stolen vehicle is calling on the province to ensure all chronic car thieves have their court orders enforced and that all breaches are reported to police.

Zdislaw Andrzejczak was driving home on December 11, 2009 when his car was hit by a stolen Hummer on Alfred Avenue. The impact killed Zdislaw and left a family devastated just before Christmas.

On Monday, the Andrzejczaks held a news conference to present a petition with hundreds of signatures calling for tougher enforcement on court orders for car thieves.

“We can’t bring my father back, but if this government cracks down on car thieves it may save someone else’s life down the line,” said Kamil Andrzejczak, Zdislaw’s son. “My father’s death was a preventable tragedy.”

Kamil, his wife Elizabeth and mother Jolanta, presented the petition to Conservative Justice Critic Kelvin Goertzen. The petition will be read by Goertzen in the Legislature after the House resumes November 16.

Two Level 4 car thieves were arrested in connection with the accident almost one year ago. Eighteen-year-old Mark Douglas Rodgers and a 17-year-old male, believed to be the passenger on that afternoon, were charged.