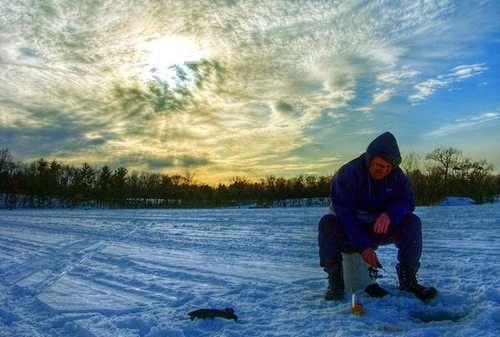 A public meeting on November 24 will gather ideas from the public on how to address the rising number of complaints surrounding ice fishing on the Red River north of Winnipeg. (FRIDAY1970 / FLICKR)

An upcoming meeting in Selkirk will address abandoned shelters and garbage at the end of the ice fishing season north of the city.

The provincial government is seeking public input on how to best manage ice fishing on the lower Red River from Lockport to Selkirk.

The area has been the centre of an increase in complaints made about littering and public safety at the end of each fishing season.

“There is a high level of public support to deal with the problem of abandoned ice-fishing structures and pollution of this beautiful waterway that has been designated a Canadian heritage river,” said Conservation Minister Bill Blaikie on Monday. “We need to address safety problems created when people abandon their ice-fishing shelters early in the spring, just as the province begins icebreaking activities on this stretch of river.”

The province says about 500 ice-fishing shelter owners did not comply with the legal requirement to post their name and address on the structures. The province was forced to remove all abandoned structures at a considerable cost to taxpayers.

The public meeting on Wednesday, November 24 will run from 7 to 9 p.m. at the Selkirk Inn and Conference Centre.