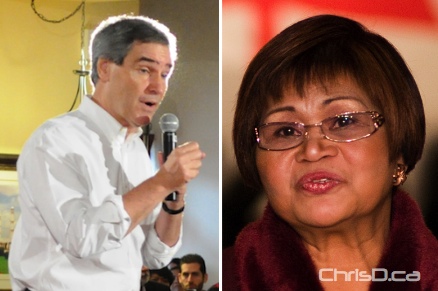 Lamoureux is one of three candidates running in the federal by-election on November 29 to take the vacant seat left by Judy Wasylycia-Leis.

During Ignatieff’s time in Winnipeg, he suggested Conservative candidate Julie Javier has an unfair advantage in rounding up support in the area due to her Filipino heritage. Winnipeg North has one of the largest Filipino populations in the city.

“It’s regrettable that Mr. Ignatieff said that my candidacy is nothing more than a game,” Javier said in a news release late Monday evening.

Javier says Ignatieff claims the Conservatives are running a Filipino only to take votes from the Liberal candidate.

“It’s offensive for Mr. Ignatieff to insinuate that members of ethnic communities all vote the same way,” said Guiang. “Putting Canadians into voting blocks based on ethnic origin is old school Liberal politics and it has no place in today’s Canada. Women, Filipinos, and members of other ethnic communities are individuals who can make up their own mind. We are not voting machines that just blindly go and vote Liberal.”

NDP candidate Kevin Chief, who won the backing of the United Fire Fighters of Winnipeg on Monday, is also running in the by-election.