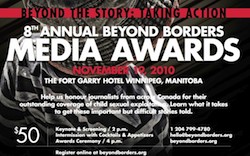 The non-profit Winnipeg-based organization dedicated to curbing child exploitation will hand out its media awards this afternoon.

Beyond Borders will honour bilingual Canadian professional and student journalists and filmmakers for exceptional coverage of child sexual exploitation issues.

“When journalists cover this issue it forces Canadians to ask what we need to do as a country to protect children,” said Deborah Zanke, co-chair of the awards. “These awards recognize this valuable role.”

The ceremony runs from 2-5 p.m. at the Fort Garry Hotel and will be hosted by Rick Campanelli of “ET Canada” and Quebec actress Danielle Ouimet.