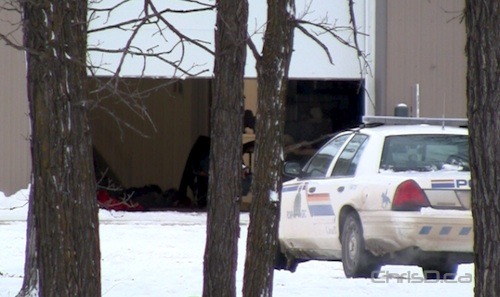 RCMP investigate a shooting at a rural property in the RM of Ritchot on Saturday, November 20, 2010. (CHRISD.CA)

A 59-year-old man remains in critical, but stable condition after a shooting in the RM of Ritchot on Saturday.

The incident happened at a rural location on Waverley Road just north of La Barriere Park at about 3:15 p.m.

RCMP say three men were in a workshop preparing to butcher livestock, when a rifle held by a 23-year-old St. Adolphe man fired. The 59-year-old St. Andrews man was hit and rushed to hospital as a result.

No charges have been laid at this point, as police continue to investigate.

Ritchot is located about 10 minutes south of Winnipeg.