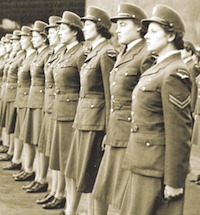 A tribute to the men and women of the Royal Canadian Air Force is on now at the Western Canada Aviation Museum.

The RCAF Women’s Division was an important contribution to the nation’s war effort during the Second World War, and numerous photographs and artifacts are on display.

A similar display has been erected for RCAF airmen from Manitoba during the Second World War. Two men lost their lives during combat, Pilot Officer Andrew Mynarski and Pilot Officer Cecil Hubley, while the third, First Officer Andrew Kindret, was shot down during a bombing mission, captured and spent the remainder of the war in a German Prisoner of War camp.

The public can get an up close look at letters, photos and artifacts from this historic period in the RCAF until December 30.