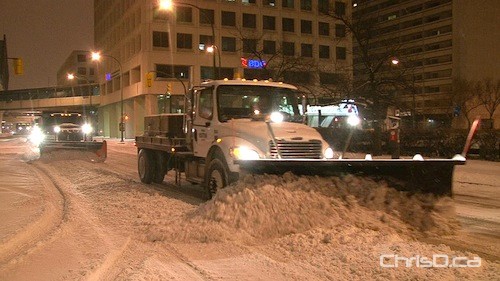 Residential streets will get some attention after 43 cm of snow has accumulated over the last week in the city.

An overnight parking has been put into place for Friday at midnight, so the City of Winnipeg can begin clearing streets at 8 a.m. The ban will remain in place until 6 a.m. on all streets not designated at snow routes.

Vehicles parked on affected streets during the prohibited times are subject to being ticketed. Plowing of residential streets is expected to take three to four days.

The public will be notified which streets are on the schedule to be plowed by 2 p.m. daily at Winnipeg.ca.

“Residential streets have a heavy snow cover that requires plowing,” said Ken Boyd, manager of the City’s Streets Maintenance Division. “To assist the plowing operation, we are asking the public not to park on residential streets scheduled for overnight plowing starting Friday at midnight until the residential overnight parking ban is lifted.”

The city says plowing of regional streets, bus routes and collector streets is still ongoing and should be completed by Friday morning. Conditions will be reassessed at that time to determine if further plowing is needed.

The estimated cost of this week’s cleanup, which also includes back lanes, is $5 million.