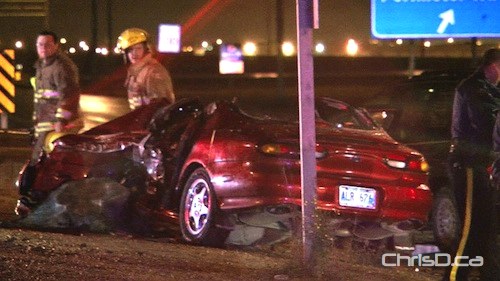 Alcohol was a contributing factor in this fatal collision that killed a 22-year-old West St. Paul man on Highway 8 at Grassmere Road on Wednesday, November 10, 2010. (SHAUN MCLEOD)

The provincial Conservatives are slamming Manitoba Public Insurance’s under-spending on impaired driving prevention campaigns — and blaming the NDP for being out of touch on the important issues.

“They have money to advertise an enhanced drivers’ licence nobody wants but they reduce spending on impaired driving prevention,” said Opposition Leader Hugh McFadyen. “It is another example of NDP mismanagement and priorities that are out of line with the needs of Manitobans.”

According to MPI data, 25 Manitobans were killed in 2009 and another 268 were injured in crashes related to impaired driving.

About 30 percent of road fatalities in Manitoba are alcohol related, making up for several fatal crashes in the last few months.